How to make Jeremy jump with joy,     –    Just a single piece of his favourite local pottery will do the biz.  More of that later.

It has been very hot and still today. Just occasionally a bit of breeze came by but there was clustering around the bits of shade that the tents made and only the hardiest braved the open fellside. What a contrast to huddling in the tent last weekend when the rain was coming down like stair rods and the first plank bridge was under water. Now there is not even damp beneath the plank.

We have been extending the bottom end of the trench to try and pick out the curve on the outer wall. Bob did a valiant shift on the mattock and spade while the wimps amongst were trowelling in the centre as Peter was removing some of the top layer of stones. I’m beginning to think that the mat of roots belonging to the rushes is as pernicious as the bracken rhyzomes and much harder to remove leaving its tendrils across neatly trowelled stones.

Conscientious digging at the bottom end of the trench 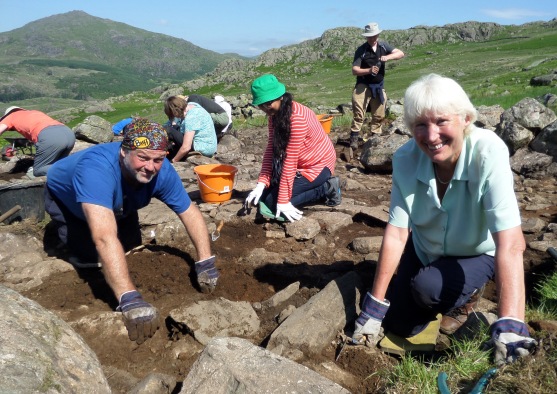 Serious inroads being made to expose the lower wall

I found a couple of interesting smooth flat stones that had a sort of potterish feel about them but they were rejected by Jeremy. Then Kath asked what I thought of something she’d found near the bottom corner. I was convinced and Jeremy was dancing a jig. Not only a pottery fragment, probably the base of a jug, but Silverdaleware to boot. We lost some of the supply of rehydration water to expose its full beauty and I gave Kath a big hug for making our leader so excited.

Kath finds the find – our first piece of pot 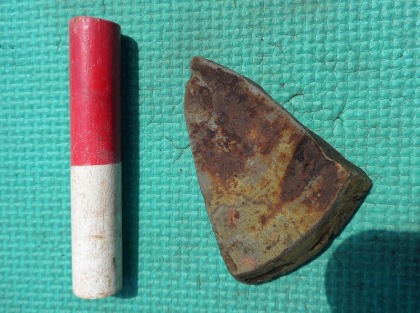 The fragment of Silverdale Ware

So they did have pottery in the valley and all we needed to do was to keep on looking. You could see a distinct change in the quality of trowelling right across the site as the race to find the second piece began. Jeremy was not impressed by offers of Arnsideware, Carnforthware and even High Benthamware didn’t convince him.

And we had a special visitor too. Young Isaac came with Adam his dad who has made the brilliant reconstructions of Viking burial artefacts on display at Tullie House https://blueaxereproductions.com/2016/05/18/tullie-house-exhibition-of-the-cumwhitton-viking-graves/

Isaac found an interesting axe shaped stone and that would have been the end of it for most children. Not so for someone with a special dad. When we met them descending on the track, Isaac had his axehead, sharpened and hafted into a split stick tied in with cord made with twisted reeds. All he was missing was an oak tree ready for felling.

As we were packing up, the cows and calves made an appearance so out came the tarpaulin. We hope the flapping green “grass” will repel rather than attract them now we have left the site. It will be interesting to see how many barrowloads of manure need clearing in the morning.